What do they do and why 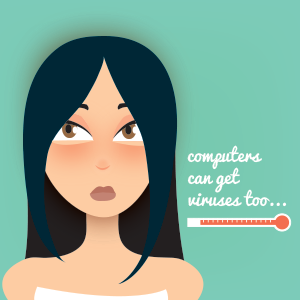 Unfortunately, computers can get viruses much in the same way that humans do. Everyone does their best to prevent catching colds by staying healthy and clean. Our electronics need a similar kind of attention to avoid a computer virus. Even though a Mac is less likely to fall victim from a virus than a Windows PC,  they are not bullet proof from them either. Therefore, weather you own a PC or a Mac, learning what a virus does is beneficial to taking care of your investments.

The three most common computer viruses

Trojans
Earning its name from the famous Greek story, it firstly appears as a safe file that you have in your computer. Then it releases code that has the ability to destroy your computer from the inside by deleting data, blocking data, modifying data, copying data, and disrupting the computer’s functions.

Backdoors
This is a form of malware that goes around your computer’s defensive line by unlocking the backdoor and creating a hole in the software. Backdoors can be combined with Trojans, which creates twice the mayhem. Hackers control this malware more closely, which is worse for you. They have all the ability a Trojan has, plus the ability to send and receive files.

Rootkits
This virus has been considered some of the worst to extract. Hence its name, it conceals itself deep into the computer where they can’t be detected easily. Rootkits have the ability to copy, hide, and restart itself even after you have stopped it. This makes them difficult to locate and fight off because they can retaliate over and over.

A virus can appear in the form of anything, which makes it important to keep your antivirus software current. Hackers create these viruses because they can attain information, which can lead to access to all of your personal accounts. Most people do not realize when they have a virus and when they finally find out its too late. If you are concerned that you may have a virus or need to update your software, feel free to give TechPros a call.