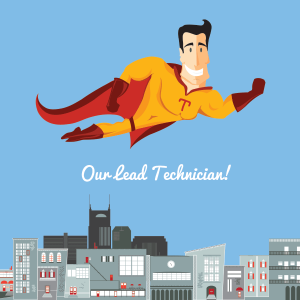 David Molteni…there’s just so much to say about this guy. Not only is he insanely knowledgeable about all things technology and an expert at running wires, but he can grow a mean beard and clearly knows how to rock the glasses…in fact, as Technician Team Lead, he started the trend here at Tech Pros.

David has been fascinated by computers for as long as he can remember and has been fixing them ever since he broke his Windows back in 6th grade. He’s seen technology come a long way since then but still remembers those giant floppy disks which have now, thankfully, been replaced by small USB drives that you can carry around easily on your keychain.

He started his pursuit in the IT field in 2006 and we were lucky when he came on board with our team just over 2 years ago. With extreme dedication, he works hard to serve our customers and, though his job is often hectic and stressful, never seems to lose his patience. Because he’s so passionate about problem solving, he always makes time for his customers whether that means a quick phone call or actually attending to the problem on site. And he doesn’t sugar coat anything, he’ll tell you straight up what the problem is and lay out all of your options.

But who is this guy really? When he’s not hard at work fixing computers he’s probably underneath a car fixing it…while jamming out to Tool of course. He prefers PCs over Macs, Mozilla Firefox over Internet Explorer, and Subarus over just about any other car on the market. If you want a strong opinion on something, he’s your go to.